I'm looking at real estate listings in Lockport, NY and I see many houses for sale on Regent St, (which runs parallel to Morrow which has a Bennett Drexel) and it looks like there might at least one Bennett for sale.

40 Regent St, Lockport, NY is what I am sure is a reverse-plan Bennett Carolina. The Carolina is a large four-square first offered in Catalog No. 21 in 1922. It is the fraternal twin to The Erie, which was offered in the first Bennett Homes catalog on 1920. It wasn't offered as many years as the more popular Erie.

The biggest difference it the Erie has a seperate front entrance and a smaller living room, where the Carolina's living room spans the front of the house and has a fireplace (which, of course, could be optional).
Let's take a look, shall we? (All photos are from the real estate listing)

The house does have an addition on the back. I don't think it's original because Bennett extensions, usually breakfast rooms, usually have a flat, not pitched, roof. The single bedroom window on the back is just where it should be!
There are some differences but they aren't dealbreakers. In fact, I find some of them kind of fascinating.
.
Front door is a "Mohawk" door and not the "Chautauqua" that the catalog calls out.

Hardware on the door is the typical Bennett offering. 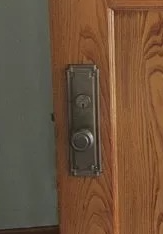 Nice view of the living room and the staircase.
The staircase and newel post are the typlical Bennett offering and match what is indicated in the floorplan.

The catalog calls for a bookcase colonnade between the living and dining rooms. This house has opted for smaller opening and French doors. The back wall which should have the two windows instead has a cased opening into the back addition which looks like a den opening onto a deck. I didn't include the real estate photo of the den.
Biggest and a really interesting difference is in the living room. What is not called out in the catalog but this house has are built in bookcases on either side of the fireplace. It was definitely an option as can seen in the photo of a living room featured in the same Bennett Homes catalog.
Lo and behold! The leaded glass doors match bookcase colonnade Style B.

Anyway, I think it's exciting.
Closets are where they should be. Added bathrooms, which one would expect when the original house comes with only one.

. For all its dowdiness, I love the Carolina.
at July 31, 2022
Email ThisBlogThis!Share to TwitterShare to FacebookShare to Pinterest
Labels: Bennett Better-Built, Carolina, Erie, Lockport, NY, Ray H Bennett