A Jewel of a Bennett Croyden in the Town of Tonawanda


One of the more common models of  post-1930 Sears, Roebuck mail order homes was an English Tudor Revival style home trending at the time. Sold from 1933 to 1940 as the Wilmore, this model first appeared in 1930 as the Jewell (and then Jewel).


With such a common design offered by so many companies, catalog or not, it's sometime hard to distinguish one from another from a superficial and even a not-so-superficial glance. Even with a catalog image it can be a challenge since sometime the catalog image does NOT actually match the house in question or is "borrowed" from another company or elsewhere, maybe altered in some way or not.

Locally, The Ray H Bennett Lumber Company – Bennett Better Built  Ready Cut Homes started offering their own version called the Croyden. The Croyden first appeared in the 1932 catalog.As you can see it is almost indistinguishable from the Sears Jewel/Wilmore.

43 Cleveland Drive in the Town of Tonawanda is a different story.

The house is located just north of a small, 1926 subdivision called Paramount Park which is located between Delaware Rd and Belmont Ave to the east and west, and Northwood and Southwood to the north and south. Paramount Park is home to one beautiful Bennett Sheffield, two fantastic, authenticated Sears Mitchells, an amazing, authenticated custom Sears house (read more about it here) and an unauthenticated Sears Barrington.   With those odds a few streets down, it could go either way.

I tried to authenticate it by researching the street address, even confirming through Sanborn maps that the house number and street names were the same. Nothing. I thought it would remain a mystery. But that's OK. We're used to unfinished authentication business. It also makes it that much sweeter when we can authenticate a house.

Every so often I'll look for Mechanics' lien information. I usually don't because I've never had much success. Enter Philip J. Sapienza and his Mechanics' Lien. I was totally intrigued by the Tonawanda aspect. But which Tonawanda? The Town or the City?


So thinking that I would reach a dead end as usual, I checked the 1940 Census for Mr. Sapienza. He lived in the Town of Tonawanda and the street seemed familiar.

Following the trail with growing excitement, I knew exactly where and what house it was. I took these photos of 43 Cleveland Drive back in August 2017.

My fellow researchers and I even came to the conclusion that the photo in the Bennett catalog wasn't even from an actual Bennett house and more likely a Sears Jewel since the door is a Sears door with Sears curlycue iron strapping. Judith Chabot over at Sears House Seeker has a very good demonstration and explanation of the distinctive iron strapping here.  (You'll need to scroll down a bit.) Though the iron strapping looks like Sears, the details are too blunt and coarse, according to Judith.

Bennett continued to offer this style long after Sears ceased their mail-order catalog homes. By 1940 and as late as the 1951 catalog, it was known as the Crafton. The catalog image never changed from 1932. 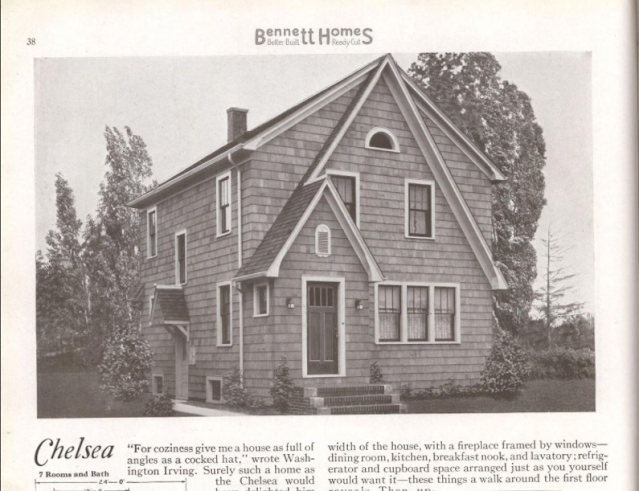